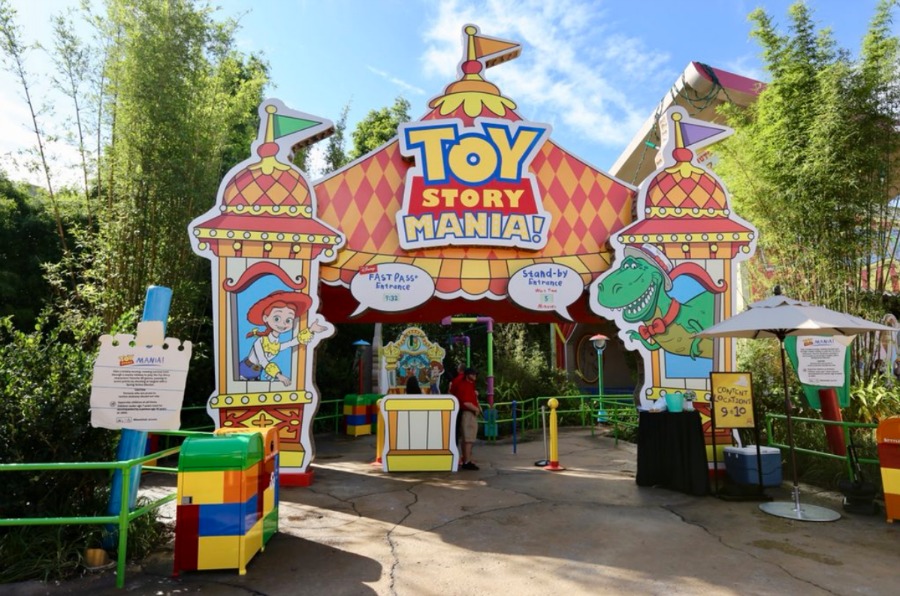 Handicapped Accessibility: This attraction has specially designed ride vehicles that can accommodate most wheelchairs.  ECVs can be driven through the queue up to the ride vehicles (ask the cast members at the front of the attraction where to go).

Toy Story Mania! is one of the most popular attractions in the history of Disney’s Hollywood Studios and it has received a brand new entrance to welcome guests entering from Toy Story Land.

Since its 2008 debut, Toy Story Mania! has been a blockbuster hit with families, combining the fun of a video game, 4D technology and interactions with favorite Pixar stars, including Woody, Jessie, Buzz Lightyear, Hamm, Buttercup, Rex, and Trixie.

Andy of Pixar Animation Studios’ Toy Story fame laid out Toy Story Mania! as a playset in his room. It’s rootin’ tootin’ fun as guests take aim at moving objects in a variety of scenes based on classic carnival midway games.

As the gateway to the ride-through action inside, the carnival-style entrance with its candy-striped marquee is, in fact, the box Andy’s Toy Story Mania! Midway Games Playset came in.

You walk in and you're reduced to toy size. The queue is loaded with an amazing assortment of nostalgic toys, including a giant Scrabble board overhead. You find yourself pointing and saying "Look at that! I had that when I was a kid!"

There's a familiar character from the Toy Story movies who serves as a "Carnival Barker" over the queue. It's Mr. Potato Head and he interacts with guests, cracking jokes and occasionally having a body part pop loose. It makes the long wait a lot more tolerable. 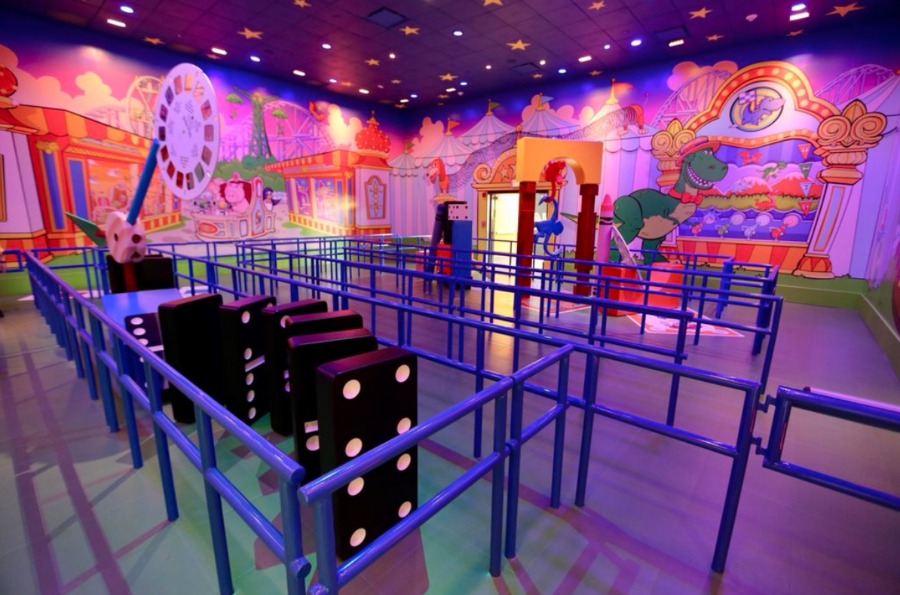 Guests queue through colorful games and game pieces, View-Master discs, Crayola crayon drawings and more. In one “box” of the queue, guests walk through a carnival midway that surrounds them on all sides. In another, they come across an Audio-Animatronics figure of Mr. Potato Head, who returns to Toy Story Mania! to serve as “Boardwalk Barker,” greeting guests with wise-cracking zingers.

After a practice round of virtual pie-tossing, there are five game stops in all – plus 4D surprises like air blasts and water sprays.

Scores are tallied at the end to determine the master of the midway, or at least who has bragging rights among family and friends. In the end, whether guests are experts or beginners, everyone’s a winner!

Each car takes 4 guests. What's unique is that you're sitting back to back, with a tall partition between you. Once you're on your way, you'll be facing your own set of targets while whoever is behind you is facing the opposite way and shooting at their own targets. It really is the same as having two completely independent vehicles combined into one. 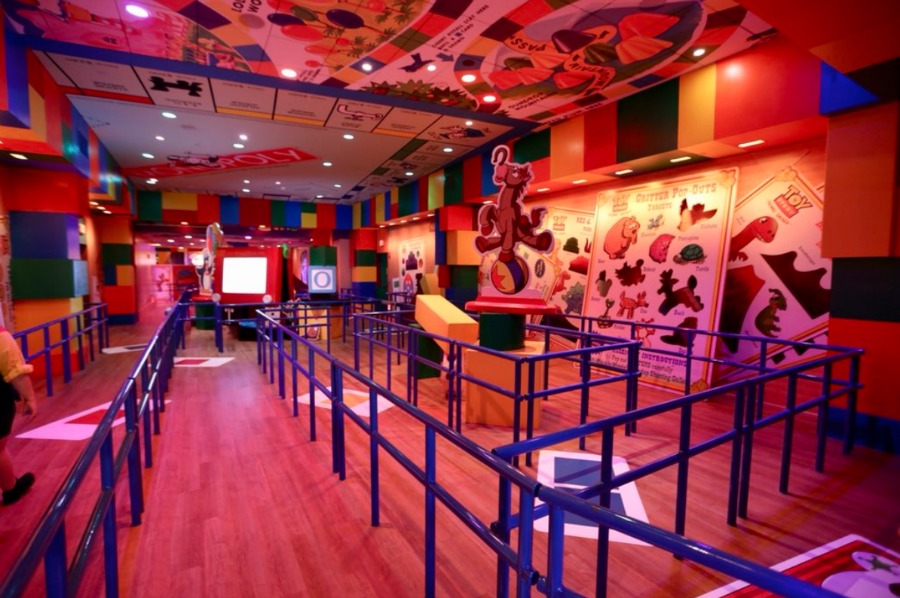 You have a toy cannon that fires via a pull string. You take aim at the targets at the game booths you encounter along the way. Cheering you on will be Woody, Buzz, Bo Peep, Hamm and the Green Army Men. Find a hidden target and you'll rack up even more points as you compete for the highest score. The targets and weapons vary with each game. What's even more fun is feeling the rush of air as you pop balloons at one of the game booths. This ride is all about the details and not a single one was overlooked.

The cars do spin, but it's not a crazy spinning like the Mad Hatter Tea Cups at Magic Kingdom. It's more of just a quick turn to get to see the next screen.

Fun Fact: Toy Story Mania! replaced the former Who Wants to be a Millionaire - Play It attraction at Disney's Hollywood Studios and is also located at Disney California Adventure Park's Pixar Pier.