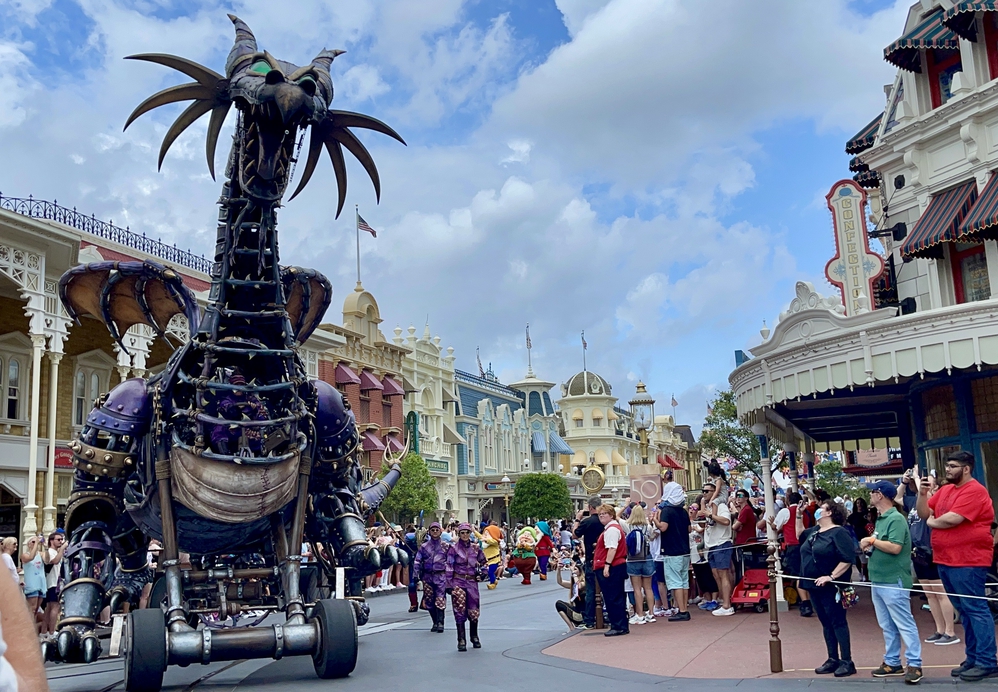 The last performance of Disney Enchantment will be on April 2, 2023.

The Disney Adventure Friends Cavalcade stars nearly 30 of your favorite Disney and Pixar friends including Nick and Judy from Zootopia, Baloo and King Louie from The Jungle Book, José Carioca and Panchito from The Three Caballeros, plus Merida, Moana, The Incredibles, and more – including the Magic Kingdom debut of Miguel from Coco in his mariachi best. as part of the Walt Disney World 50th anniversary celebration!


Book a boat to take you out on Bay Lake for a private fireworks viewing!


Harmonious made its debut on October 1, 2021, just in time for the launch of Walt Disney World's 50th Anniversary and celebrates how Disney music inspires people around the world. The last performance of this fireworks spectacular will be April 2, 2023.

Harmonious is one of the largest nighttime spectaculars ever created and features music and images that were reimagined by diverse cultural musicians and artists from around the world.

This nighttime spectacular features massive floating set pieces, custom-built LED panels, choreographed moving fountains, lights, pyrotechnics, and lasers. The floating set pieces transform from fountains during the daylight hours and will become an integral part of the show at nighttime.

On April 3, 2023, “EPCOT Forever” returns as an interim show before an all-new fireworks spectacular debuts later in 2023.

Enjoy a prix fixe menu at the Rose & Crown Dining Room or at Spice Road Table, then stay for one of the best views in EPCOT! Pricing below is subject to change at any time.

Seating for the Rose & Crown Fireworks Dining Package is located in the waterfront seating area that was formerly open for regular diners to enjoy. The price of the Dining Package is $89 per adult (10 years old and up) and $39 per child (ages 3-9) and includes tax and gratuity. Guests are able to choose from a price fixe menu that includes one appetizer, one entrée, a dessert platter, and unlimited beverages. Check in begins 45 minutes prior to the start of fireworks.

The Spice Road Table Fireworks Dining Package costs $72 per adult (ages 10 and up), and $31 per child (ages 3 to 9) and includes tax and gratuity. The package features Mediterranean fare and will allow guests to choose 2 small plates, a dessert platter, and unlimited beverages. You’ll find Spice Road Table is located along the waterfront in the Morocco pavilion. Check in for this package begins 45 minutes in advance of the fireworks.

Book a boat to take you out on World Showcase Lagoon for a private fireworks viewing!

This nightly "parade" was first performed on October 25, 1971 during the dedication of the Polynesian Luau. While old-fashioned by today's standards, it's still fun to head to the resort beachfronts to watch it go by. The water pageant can be seen from the boat-loading area at the Magic Kingdom, as well as all each resort around Bay Lake. It normally starts at 9:00 each night, but double-check the My Disney Experience app to be sure. There are two segments, one is a King Neptune theme, the other a salute to America.

New pixie dusted scenes are being added to this fan favorite nighttime water pageant, including a float representing Cinderella Castle. Guests will also hear an Electrical Water Pageant-like version of the 50th Anniversary’s theme song, The Magic is Calling. Guests who love current iteration of the Electrical Water Pageant will be happy to know that the full original show will still take place, with the additions “bookending” the pageant.

(You may want to check with the resort just in case the schedule changes or if it's canceled due to the weather that day.)